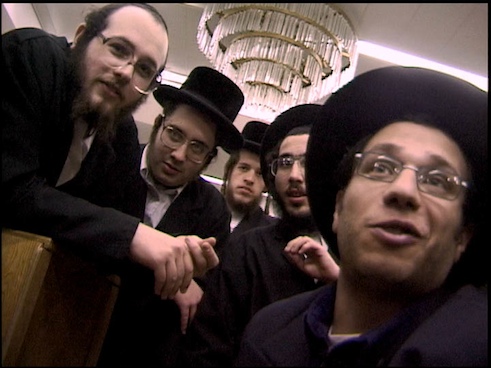 "A man who lies with a man as one lies with a woman, they have both done an abomination: they shall be put to death, their blood is on them."
Leviticus 10:13

This unprecedented feature documentary shatters assumptions about faith, sexuality and religious fundamentalism.  Built around intimately told personal stories of Hasidic and Orthodox Jews who are gay or lesbian, the film portrays a group of people who face a profound dilemma - how to reconcile their passionate love of Judaism and the Divine with the clear-cut Biblical prohibition that forbids homosexuality.  As the film unfolds, we meet a range of complex individuals: the world's first openly gay Orthodox rabbi; closeted, married Hasidic gays and lesbians; Orthodox lesbian high-school sweethearts and out lesbian and gay people who were abandoned by religious families.  One gay man asks the admired local Rabbi Joseph Langer of the Bay Area's ultra-Orthodox Chabad movement for an answer to his quandary. Vividly shot with a courageous few over five years in Brooklyn, Jerusalem, Los Angeles, London, Miami and San Francisco, TREMBLING BEFORE G-D is a project with global implications that strikes at the very essence of religious identity and tradition in a modern world. What emerges is a loving and fearless testament to faith and an affirmation of the universal struggle to belong.