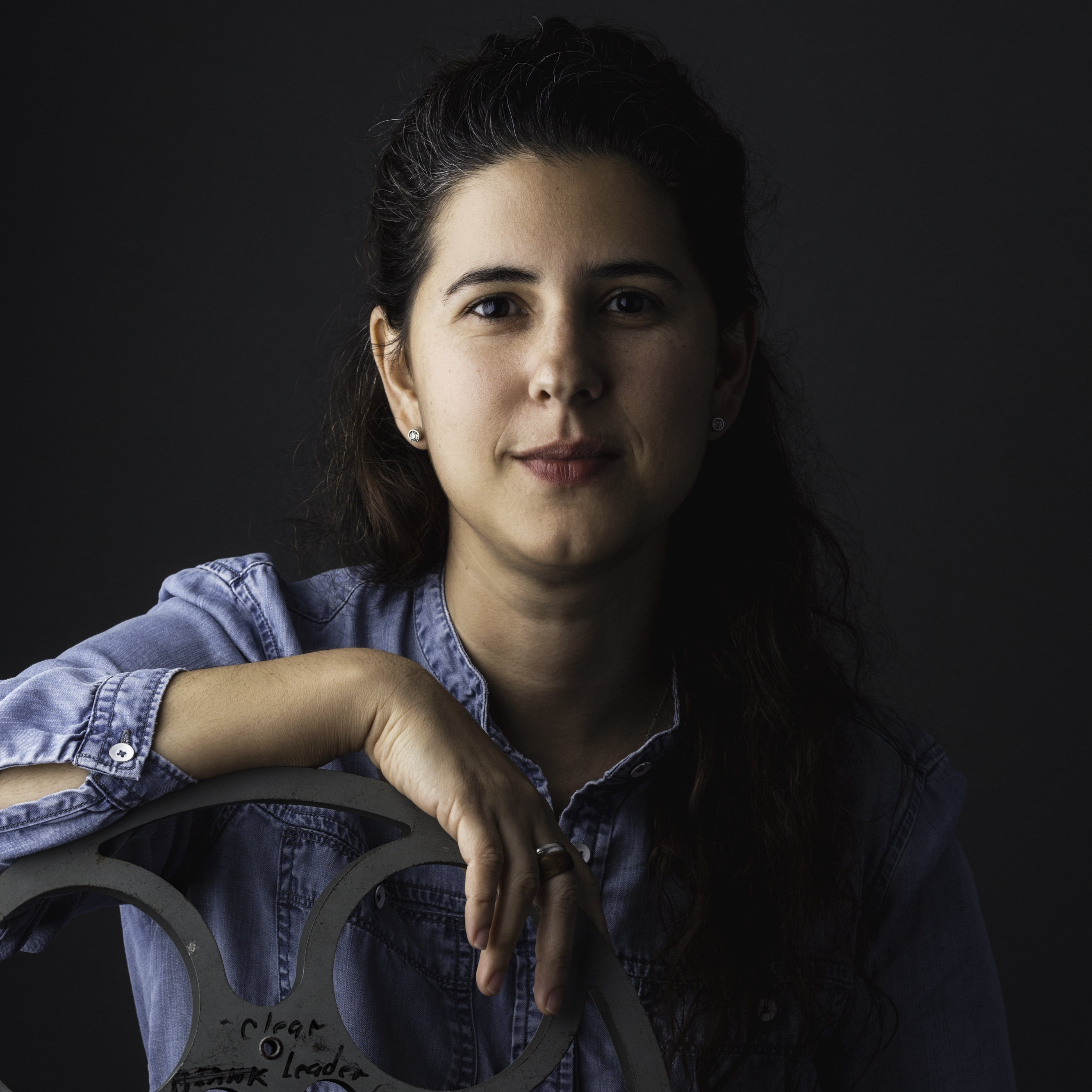 Malena Barrios is a Filmmaker and Video Content Creator based in San Francisco, whose short film The Girl and The City won the best documentary in the St. Francis College Women Film Festival in NYC (2017). She co-directed Me, Japanese, recipient of the Wave-maker Grant sponsored by Miami Cultural Affairs, the Knight Foundation & Andy Warhol Foundation. Co-scriptwriter, researcher and director’s assistant for the documentary The Red Sun in the Sunset, on Japanese immigration in Cuba and that received the Japan Foundation grant (2008).  In her free time, she was a volunteer activist for five years in "Proyecto Espiral", a socio-cultural exchange program between Cuba and the US. Currently, she directs and produces Call me Lucky (CML), selected by the Sundance Institute for the story development workshop in Miami (2016) and by Women Make Movies (WMM) Production Assistance program (2018). Member of Brown Girls Doc Mafia (BGDC). 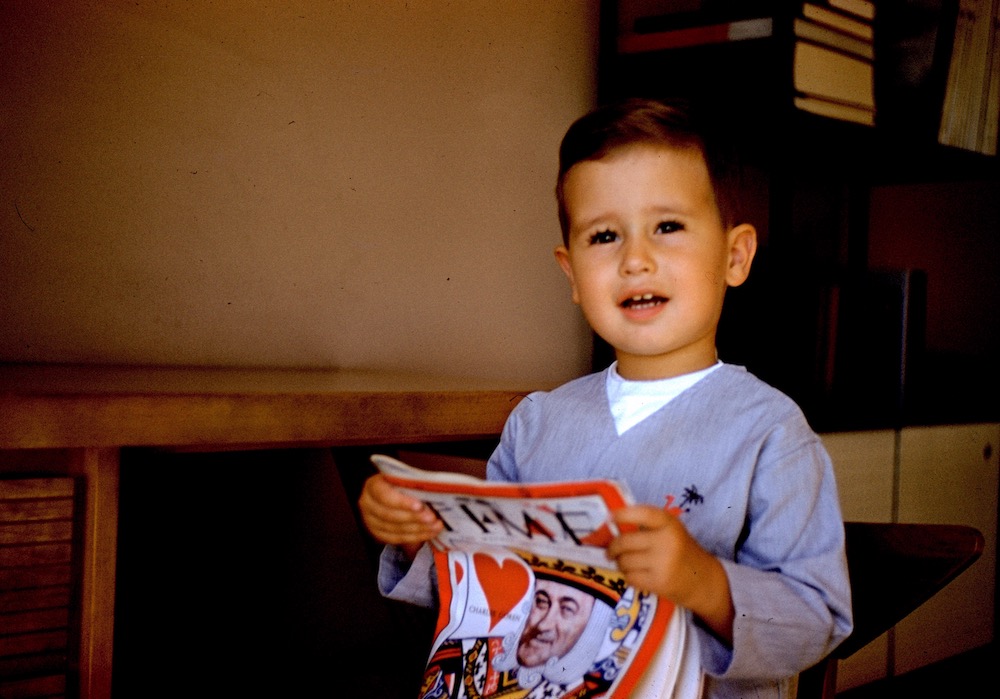 Marc is a man in his 50s who has two lives—his on-screen childhood persona performed on the films his father, a Holocaust survivor, shot of him and one off-screen cloaked in depression. As Marc combs through the 17 cans of film, old photos and film slides, he begins a process of reckoning with his father’s need for control and his undiagnosed PTSD and ultimately, coming to terms about the unconditional love that supports him to this day. 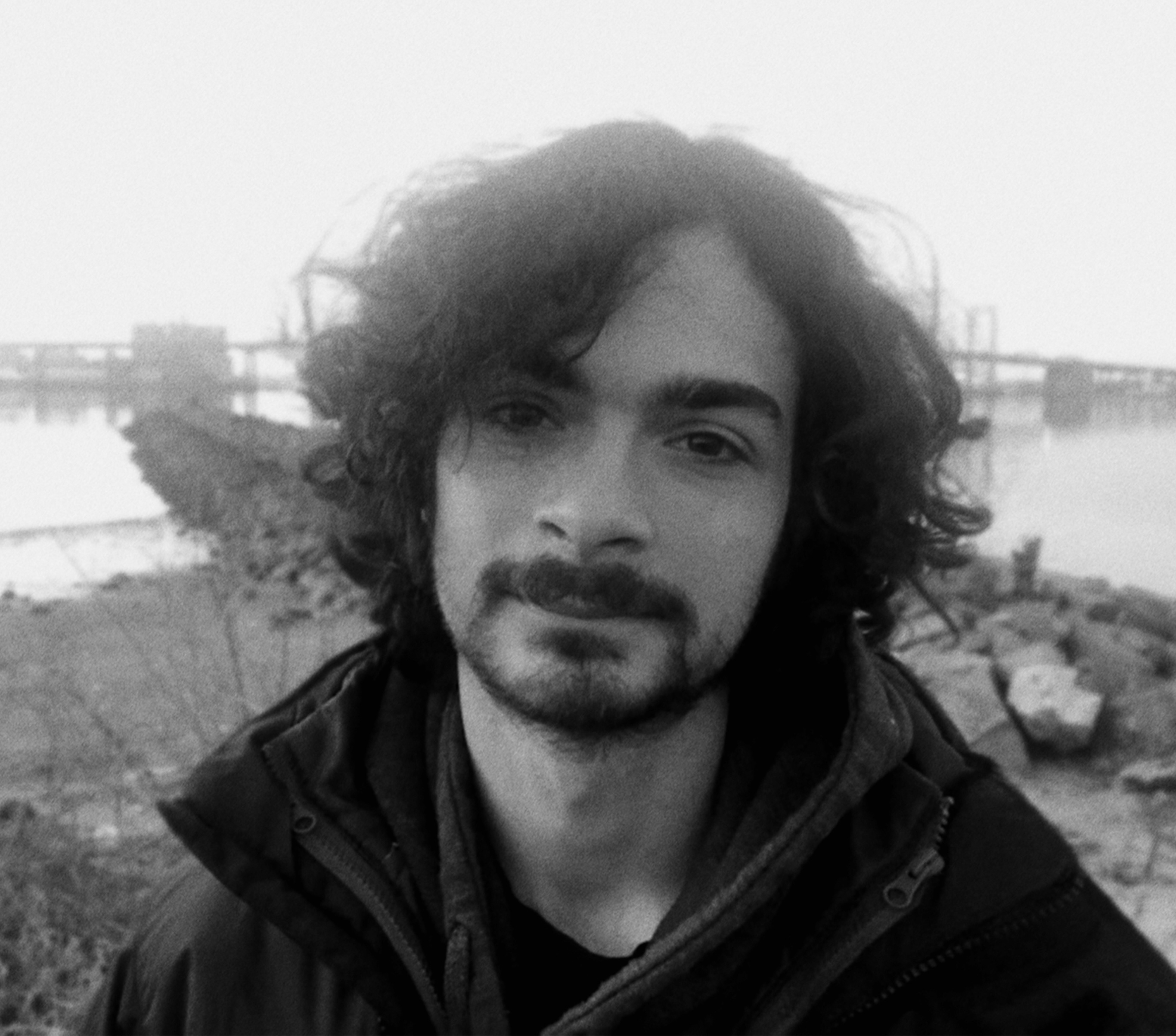 Andrew Garbus has worked in a variety of positions on a number of films that have received recognition across the country. As an assistant editor he has worked on documentaries (The Sensitives) that have played at major film festivals, and on commercials for clients such as Google, NYU, and the NHL. As a colorist, his work has premiered at SXSW (Brewmaster, Biters) and been licensed by HBO (Mosca). His short, personal documentary SOL was praised by Dallas’s Theater Jones Magazine as “The most poignant and powerful eight-minute film I’ve ever seen.” Andrew is currently finishing post-production for his first feature length documentary Everything I Own. It is a personal exploration about his family’s move out from their home of 17 years, his parent’s impending divorce, and his relationship with filmmaking as a means to better understand himself and the world. When he’s not working on films or commercials Andrew is usually exercising, practicing martial arts, or lost in deep contemplation/overthinking. 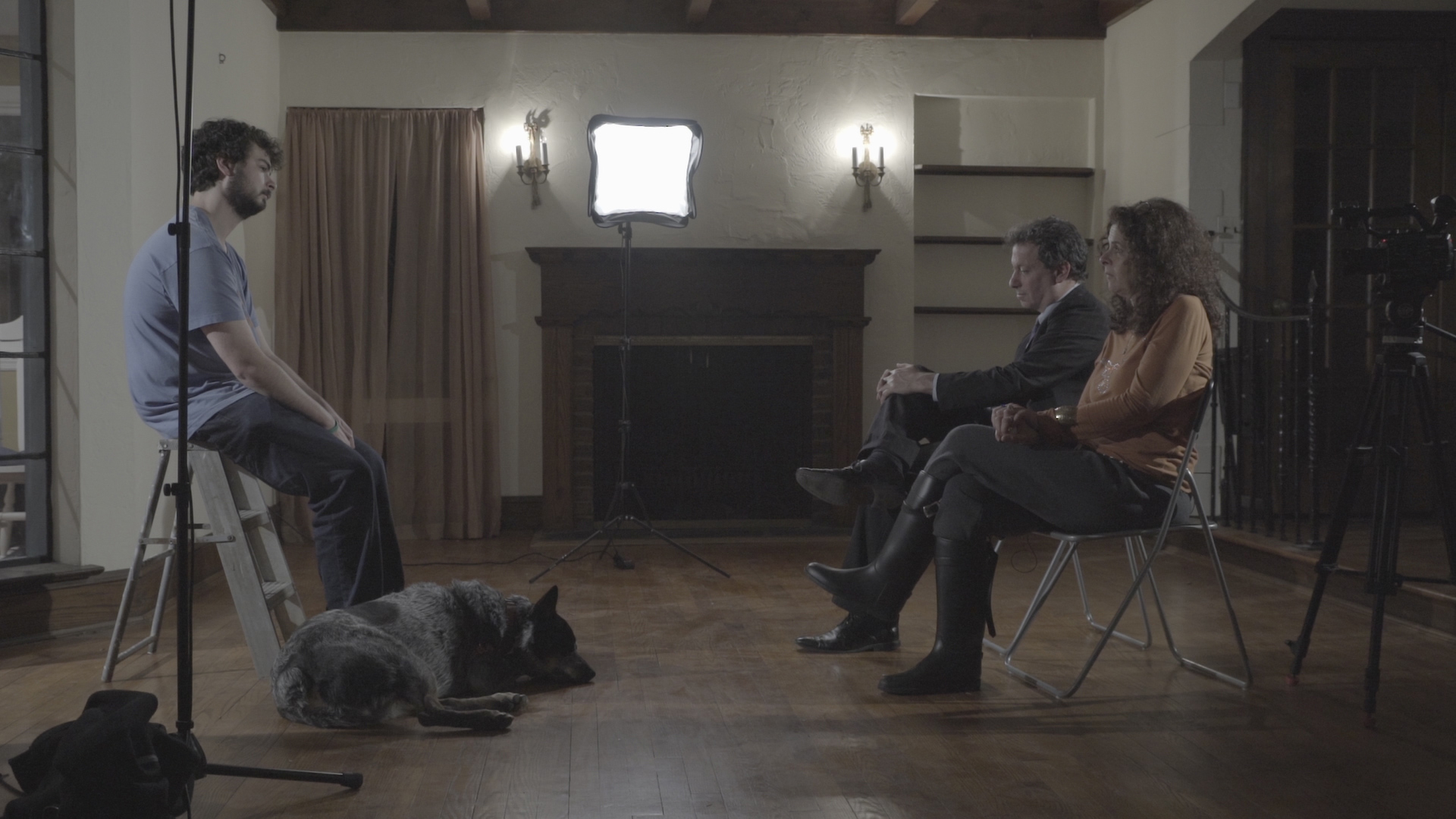 The history of filmmaker Andrew Garbus’s family has largely been captured on video, whether it’s the home movies his parents made, or the short films he created growing up. After 30 years of marriage, Andrew’s mom and dad, decide it’s time to separate and leave the home they raised their family in. Andrew attempts to find closure amidst this ending of an era in their lives, by making one last home video, chronicling their final week together. What starts off as a film about a son seeking to better understand the reasons behind his parent’s separation and his family’s history, quickly transforms into a raw and difficult journey within. Andrew is confronted with his past traumas and how they impacted his family as a whole. While the family attempts to successfully move out, decades of pain and tension come to a climax. Andrew and his parents must confront their pasts in order to come together, not only to successfully move out of the house, but to find a semblance of peace and hope for the future. 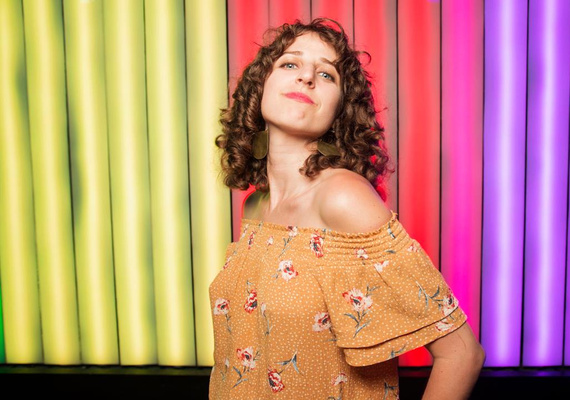 Lauren Greenhall is a filmmaker who makes character driven documentary and off-the-wall comedy content. She has directed TV and video for CBS interactive, National Geographic, The New Yorker, The New York Post, the Huffington Post, Inside Edition, and more. Her documentaries focus on larger-than-life individuals who are not regularly understood or celebrated by society at large. Her comedy work pokes fun at mainstream pop-culture and politics to reveal the nonsensical and sometimes harmful messaging that our institutions circulate. 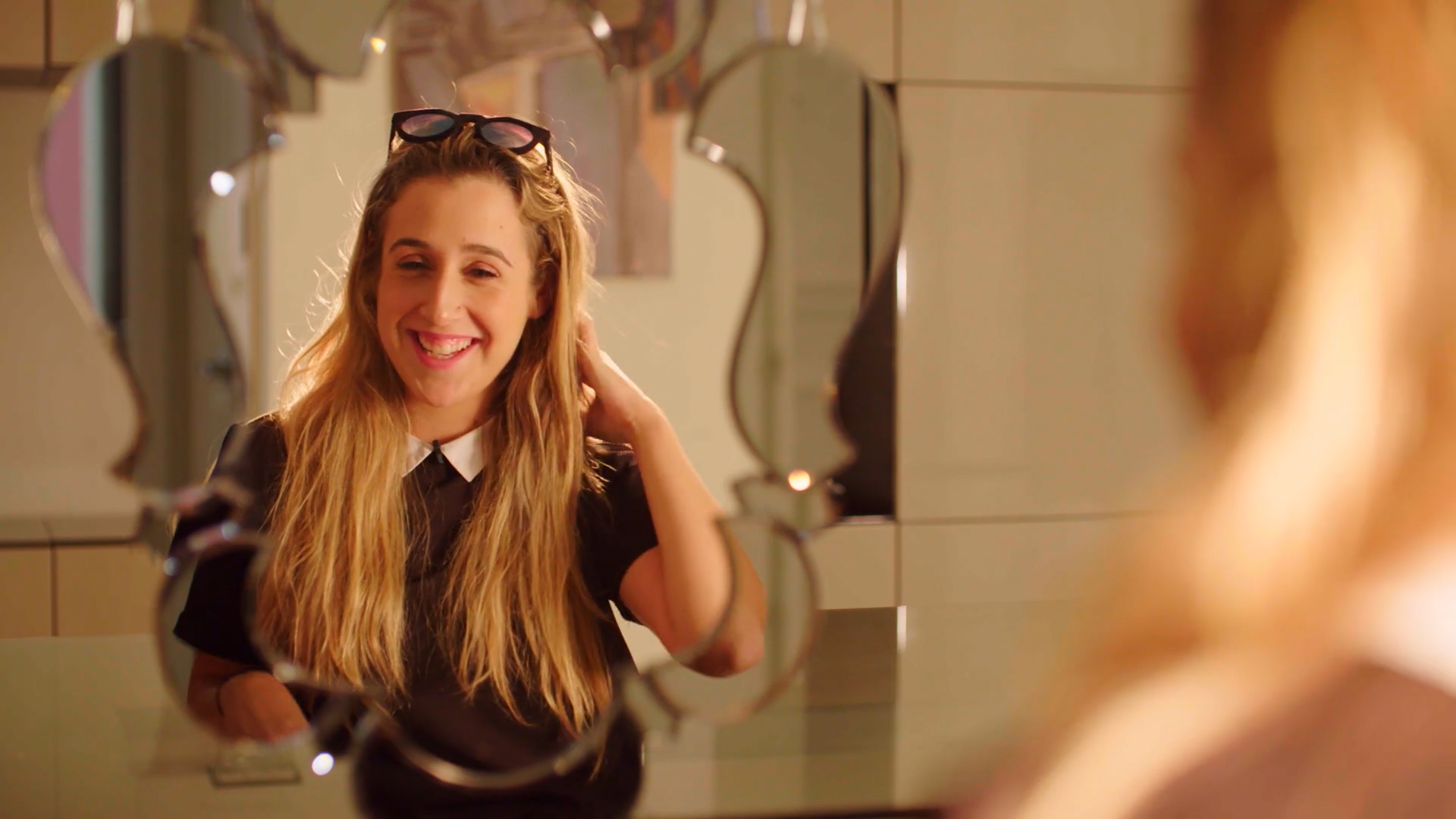 Discover the world of Zelda Volkov, the owner of a beloved wig shop frequented by the orthodox Jewish glitterati in Crown Heights, Brooklyn. In this character driven documentary, Zelda begins to question her career, relationship to God, and lifestyle choices after going through a divorce, a rarity in the Chabad community. 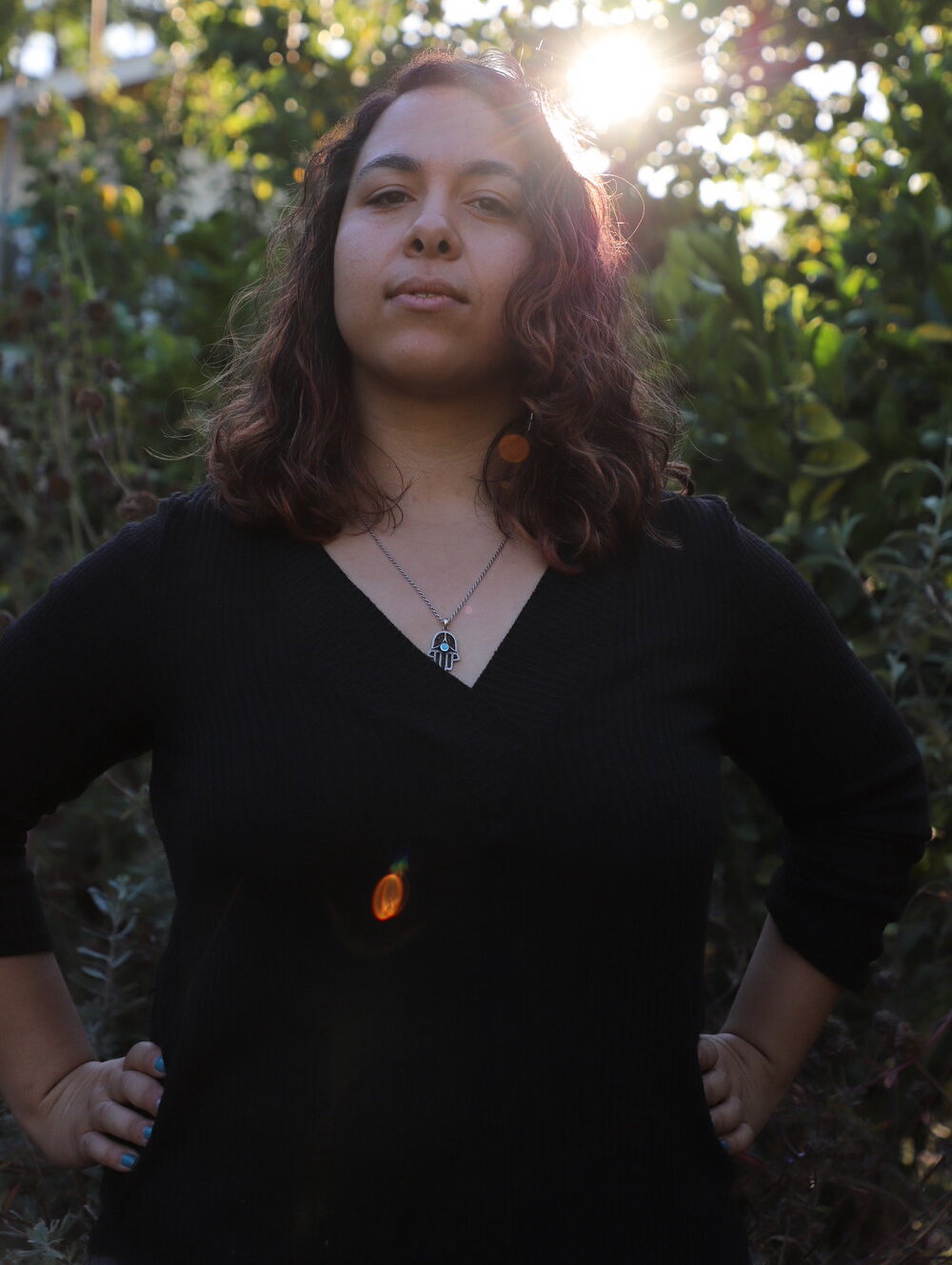 Rebecca Pierce is a journalist and documentary filmmaker based in San Francisco, California. Her multimedia storytelling covers a diverse range of topics including race, religion, global conflict, and human rights. She has a BA in Film and Digital Media from UC Santa Cruz and was an Affiliate Fellow at Harvard's Religion, Conflict, and Peace Initiative. Rebecca’s work as a filmmaker has taken her around the world with projects shot in the Middle East, Asia Pacific region, Europe, and the United States. Her essay writing and public speaking on racial justice issues affecting African American and Jewish communities has been featured by The Nation, The New Republic, Jewish Currents, The Forward, and NPR's All Things Considered. 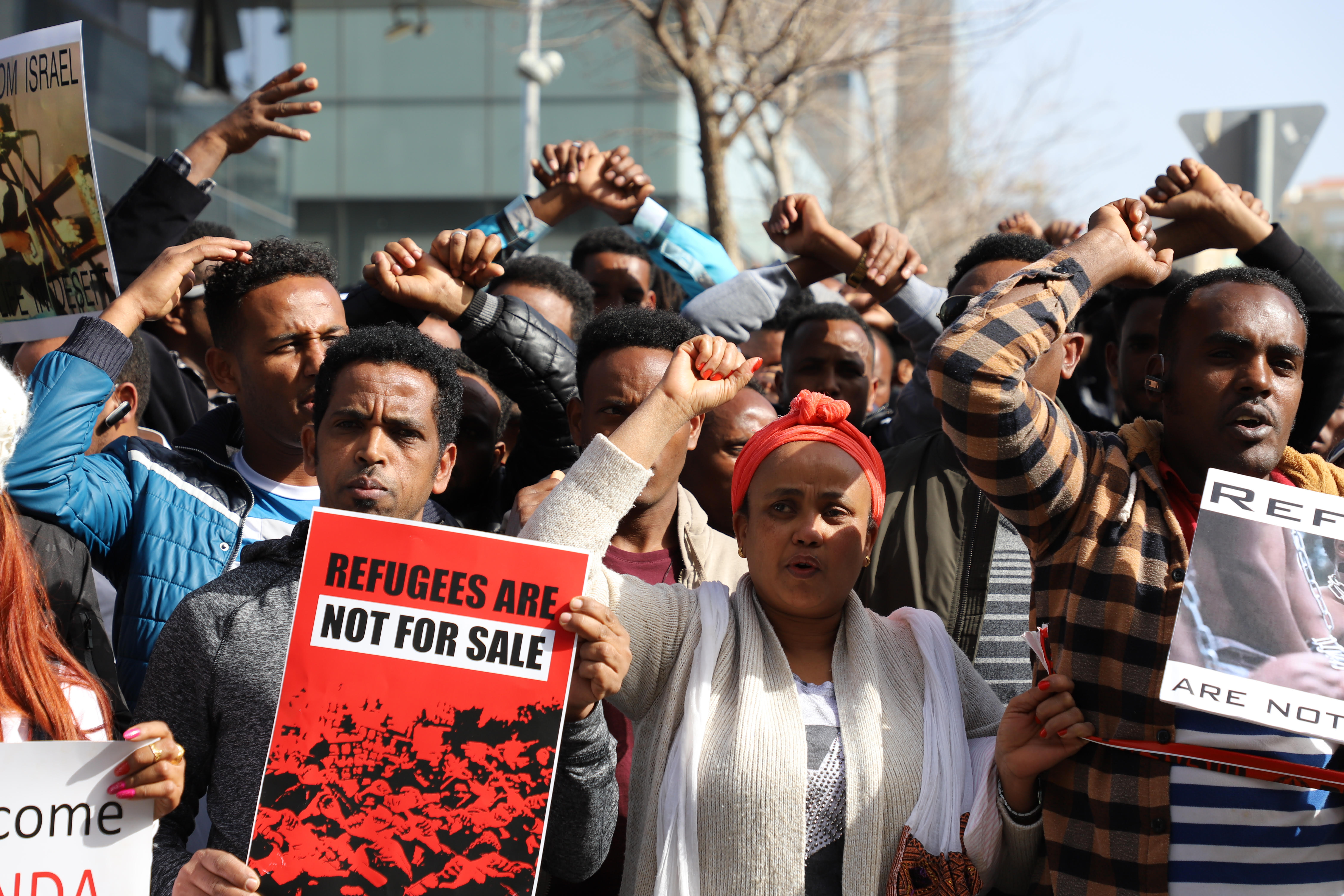 Half Freedom is a documentary focused on the lives of African asylum seekers in Israel and their relationships with their Israeli and Palestinian neighbors, exploring questions of migration, nationalism, and human rights in a country shaped by political conflict. The film follows two refugee activists, Bluts a Christian political dissident from Eritrea and Hasan a Muslim genocide survivor from Darfur, as they fight to maintain their lives and relationships in Israel while facing discrimination and incitement from right wing politicians. Filmed in Tel Aviv, Jerusalem, and Israel’s Holot Detention Center between 2015 and 2018, Half Freedom centers around two major issues during this period; mass incarceration under the Anti-Infiltration Act (which criminalizes refugees for crossing the Sinai border) and the 2018 deportation plan by Israeli Prime Minister Netanyahu under this same law. 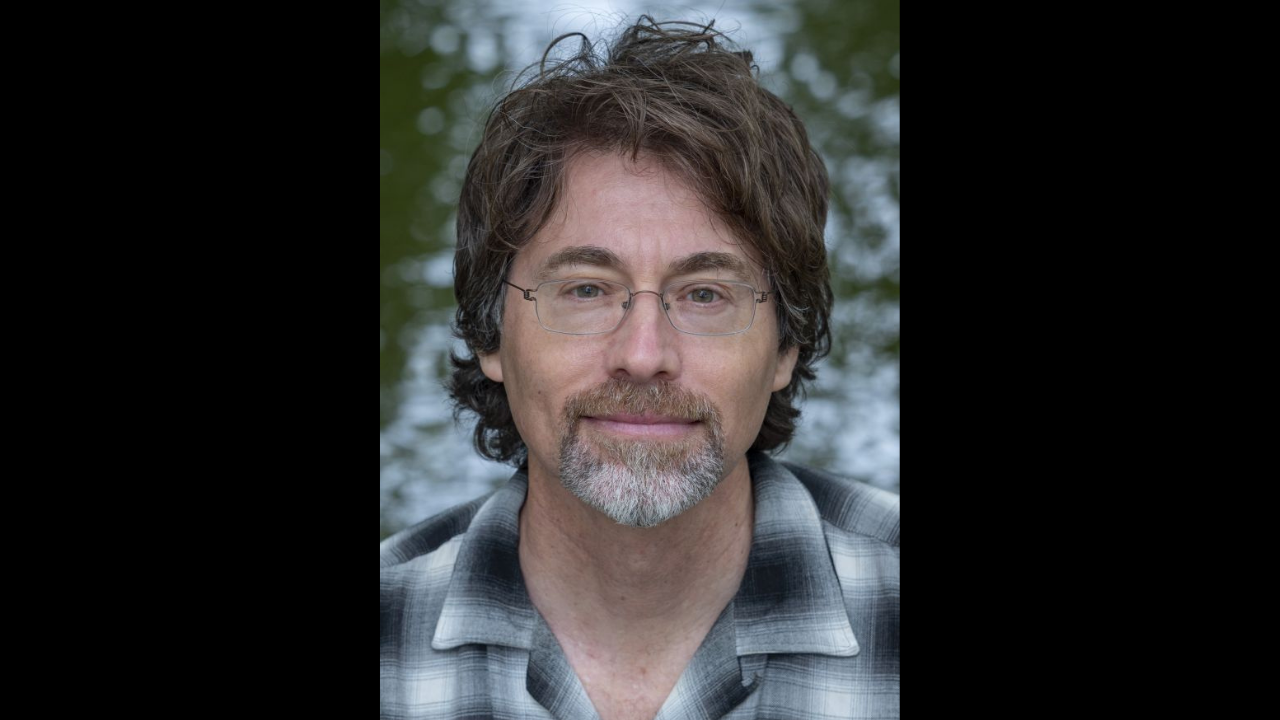 Ken Paul Rosenthal makes films that explore the intersection of art, madness, and the spectrum of difference. These films re-envision the stories of marginalized artists as authentic and redemptive healing narratives. Ken’s work has screened widely at national and international film festivals and venues. He is the recipient of numerous festival awards, a Kodak Cinematography Award, a University Film & Video Association Award, and is widely recognized for his media work in mental health advocacy. His Mad Dance Mental Health Film Trilogy circulates in over 300 academic and public libraries, screened at 73 film festivals, and has been presented in person at hundreds of universities, mental health symposia, peer support networks, and community events worldwide. Learn more at www.kenpaulrosenthal.com 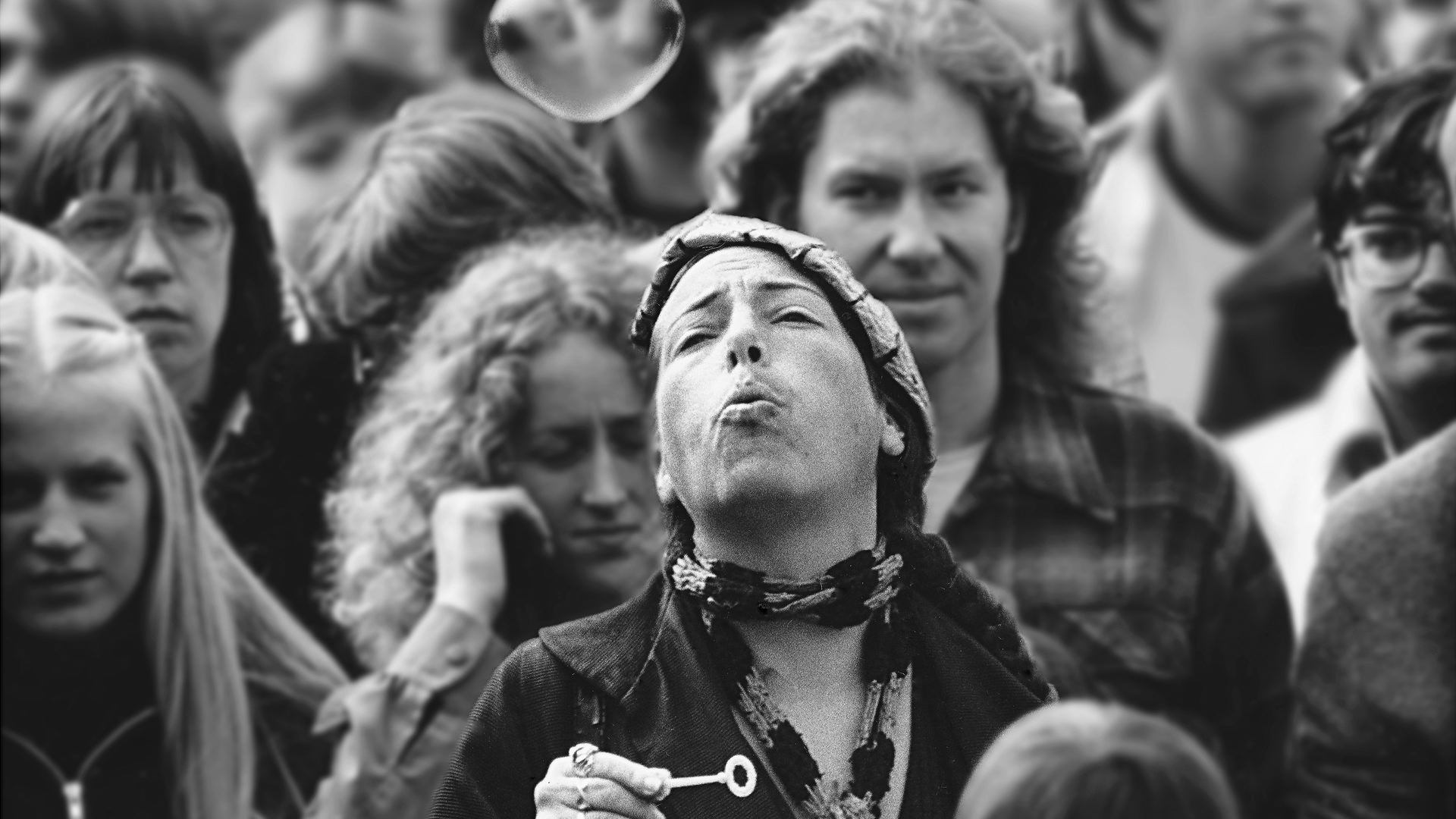 Julia Vinograd: Between Spirit and Stone tells the story of iconic Jewish street poet Julia Vinograd, who emerged from the 1960’s Free Speech movement fighting state oppression with bubbles instead of bricks. Eccentric and indomitable, often subsisting on one meal a day, the "Bubble Lady of Telegraph Avenue" pushed through poverty and polio to produce more than 70 books of poetry, winning an American Book Award, a Pushcart Prize, and Berkeley's first Lifetime Achievement Award. A lifelong champion of marginalized people and an enduring symbol of non-violent resistance through art, Vinograd embodied Tikkun Olam — the Jewish value of repairing the world through our actions. Her untold story of fearless determination and unabashed nonconformity invites viewers to reflect on the creative power of difference, joining an urgent contemporary effort to recognize diisabled artists within our cultural landscape. www.betweenspiritandstonethefilm.com 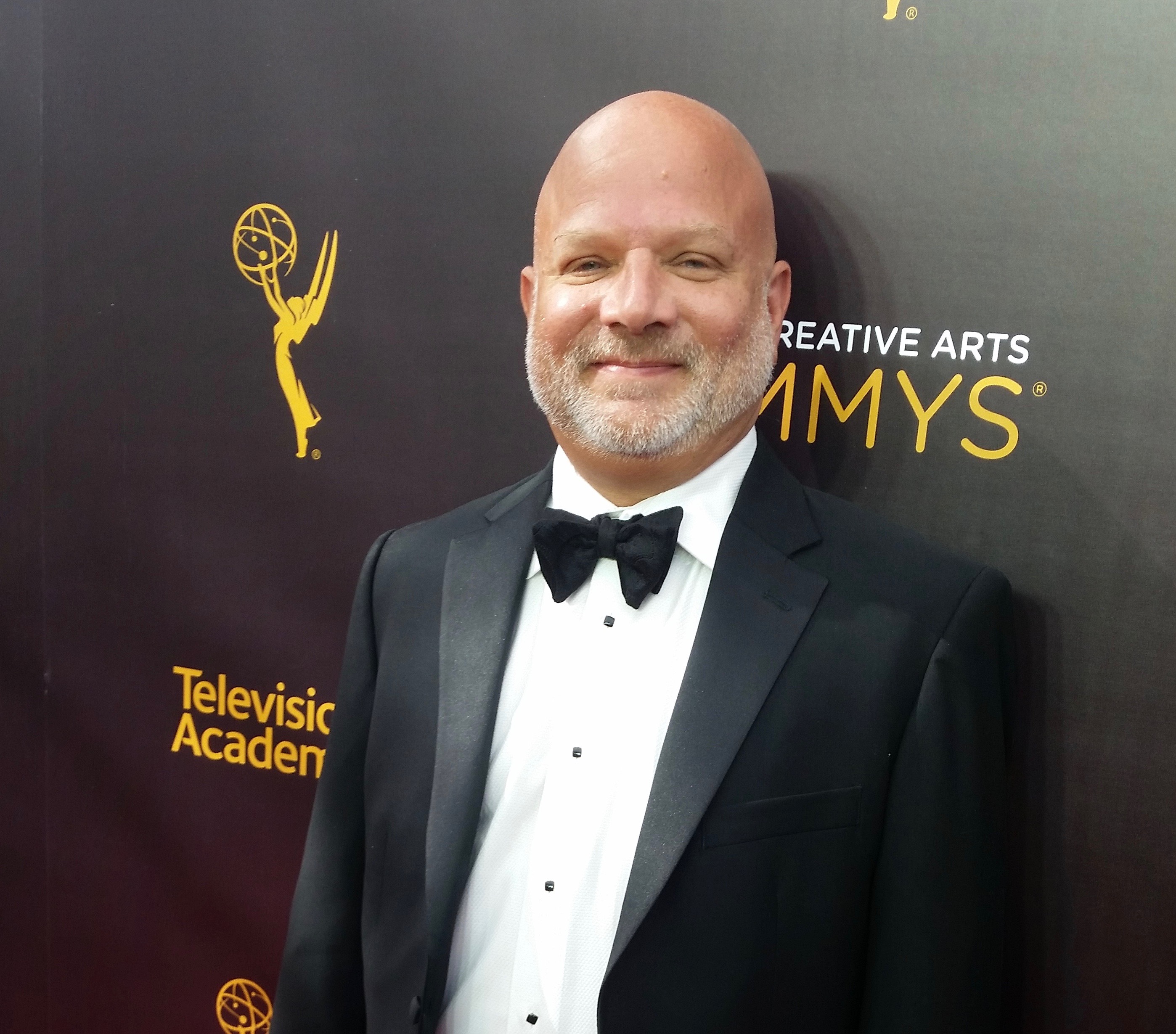 Holden Kepecs has been a film editor for over thirty years. Twenty-five of those thirty as Senior Editor for the brilliant journalist Linda Ellerbee at her company Lucky Duck Productions where he helped to create the look for the show: Nick News with Linda Ellerbee, which won every award given in television. Currently Holden is a freelance editor working for various networks including ABC, NBC and Hulu as well as various production companies in New York. While doing research on Heavyweight Champion Max Baer, Holden was surprised to lean how many Jewish boxers there were between the two World Wars. As well as the extensive effect Jews played in sport of boxing overall. He began to make Star in the Ring as a way to revive this lost chapter of history and also instill pride to Jews who can only name Mark Spitz, Sandy Koufax and Hank Greenberg as famous Jewish athletes. Holden lives in New York City with his wife and two children who are both in college. 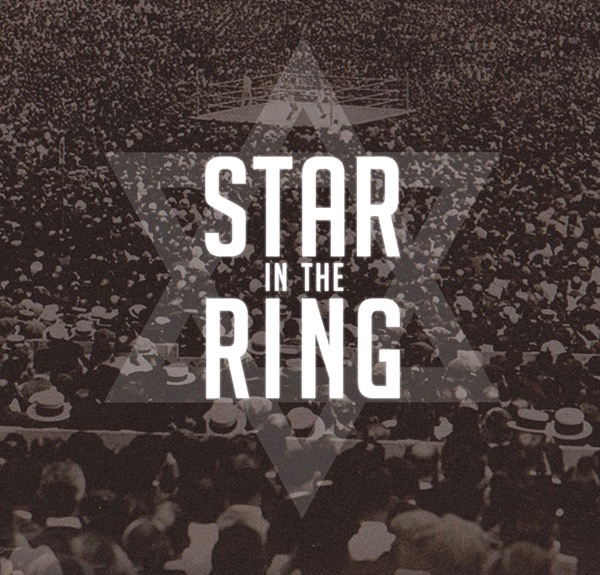 Like most immigrants who came to the United States, boxing was used as a way to get out of the ghettos and prove that you were a tough American. Every ethnic group can claim their boxing legends and tell stories of when they ruled the ring.

Jews were no different. Some of the greatest boxers of all time were Jewish. In fact, the sport of Boxing as we know it today was shaped by a Jew. Why do we as a people not know about this or claim our warriors of the ring? Star in the Ring is a historical documentary reviving that lost chapter in history. Giving pride back to other names then just Mark Spitz, Sandy Koufax and Hank Greenberg. 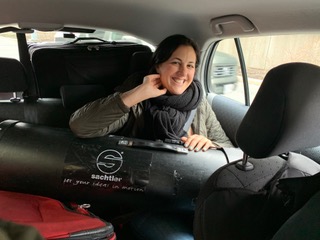 Joanna Rudnick is an Emmy-nominated documentary director and producer. In her directorial debut IN THE FAMILY (POV|PBS), she told her personal story about coming to terms with learning that she had a BRCA1 mutation, dramatically increasing her risk for breast and ovarian cancer. The film was the first to cover the world of predictive genetic testing via a verité́ treatment and was screened as part of the successful effort to pass the Genetic Information Non-Discrimination Act (GINA) as well as challenge gene patenting, a case that went to the Supreme Court. Ms. Rudnick’s directing credits include the duPont Award winning HARD EARNED (Al Jazeera America) and ON BEAUTY (Audience Award Best short, Chicago Film Festival). Her producing credits include: BILL T. JONES: A GOOD MAN (American Masters|PBS); CROSSFIRE HURRICANE, a documentary about the 50th anniversary of the Rolling Stones (HBO); and ROBERT CAPA IN LOVE AND WAR (PBS|BBC), among others. 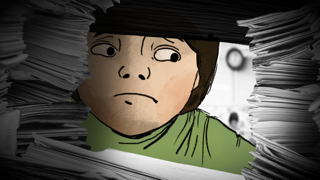 The Opioid Trilogy is an experimental triptych comprising three, short animated documentary films looking at the opioid epidemic through the demand side of addiction. Through cinematic storytelling utilizing the language and range of animation, the series will address the human and personal toll of opioid addiction, while dispelling some of the most damaging tropes of both addiction narratives and the rehab and recovery industrial complex. “Brother”, the first installment in The Opioid Trilogy is being made in collaboration with ITVS and will have its eventual home on the PBS digital platform. 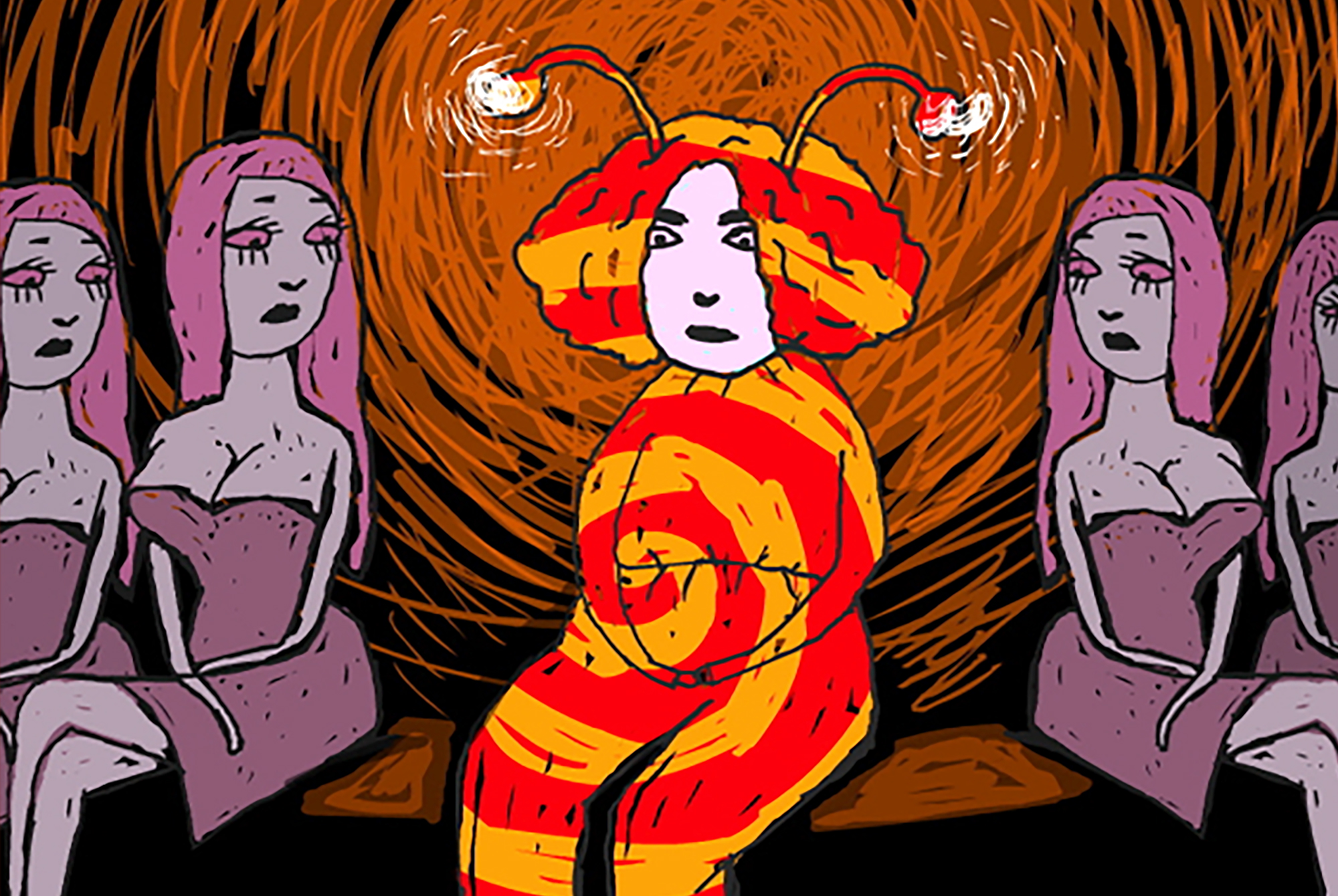 DEBRA SCHAFFNER is a filmmaker and editor of all things short and long, with an emphasis on art, education and body parts. Her work has screened at venues including SF DOC FEST, DOCS/MX, FRAMELINE and aired on PBS and SMG (China). Debra was raised by robots in the suburbs of New Jersey. She eventually made her way west where she worked as a bike messenger, carpenter, and video editor before finding her voice as a filmmaker. CURSE of the MUTANT HEIRLOOM is her first feature. 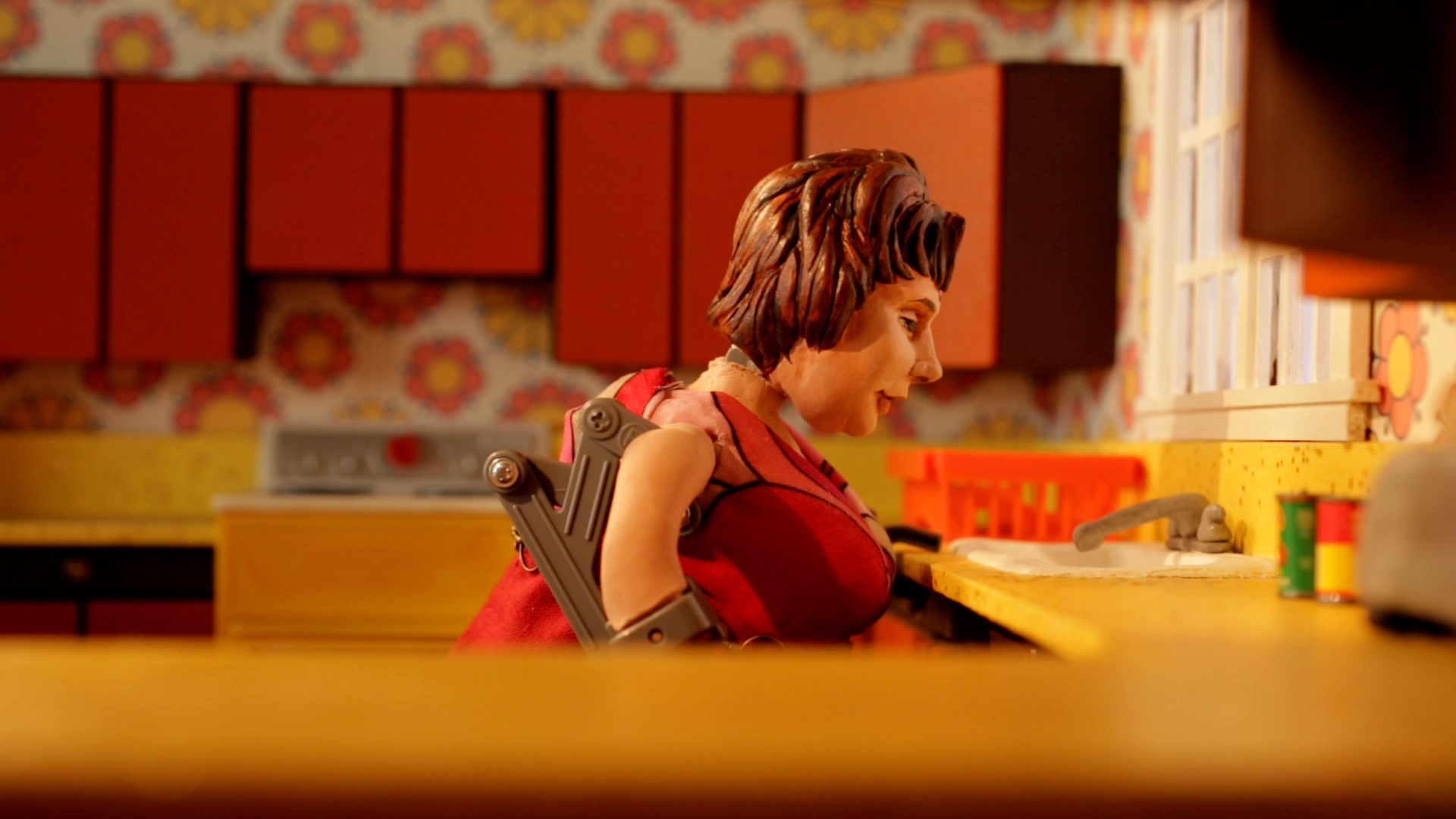 What do you do when you find out that the mother you thought gave you nothing actually gave you an heirloom you’ll never get rid of? If you have the BRCA gene mutation, breast or ovarian cancer are likely in your future. Now imagine you’ve inherited these “womanly” time-bombs from a mother you’ve always felt estranged from. This comedy/horror documentary charts the filmmaker’s quest to thwart genetic cancer with help from her mutant friends - but the biggest mystery is whether she’ll ever be able to forgive her robot mother.