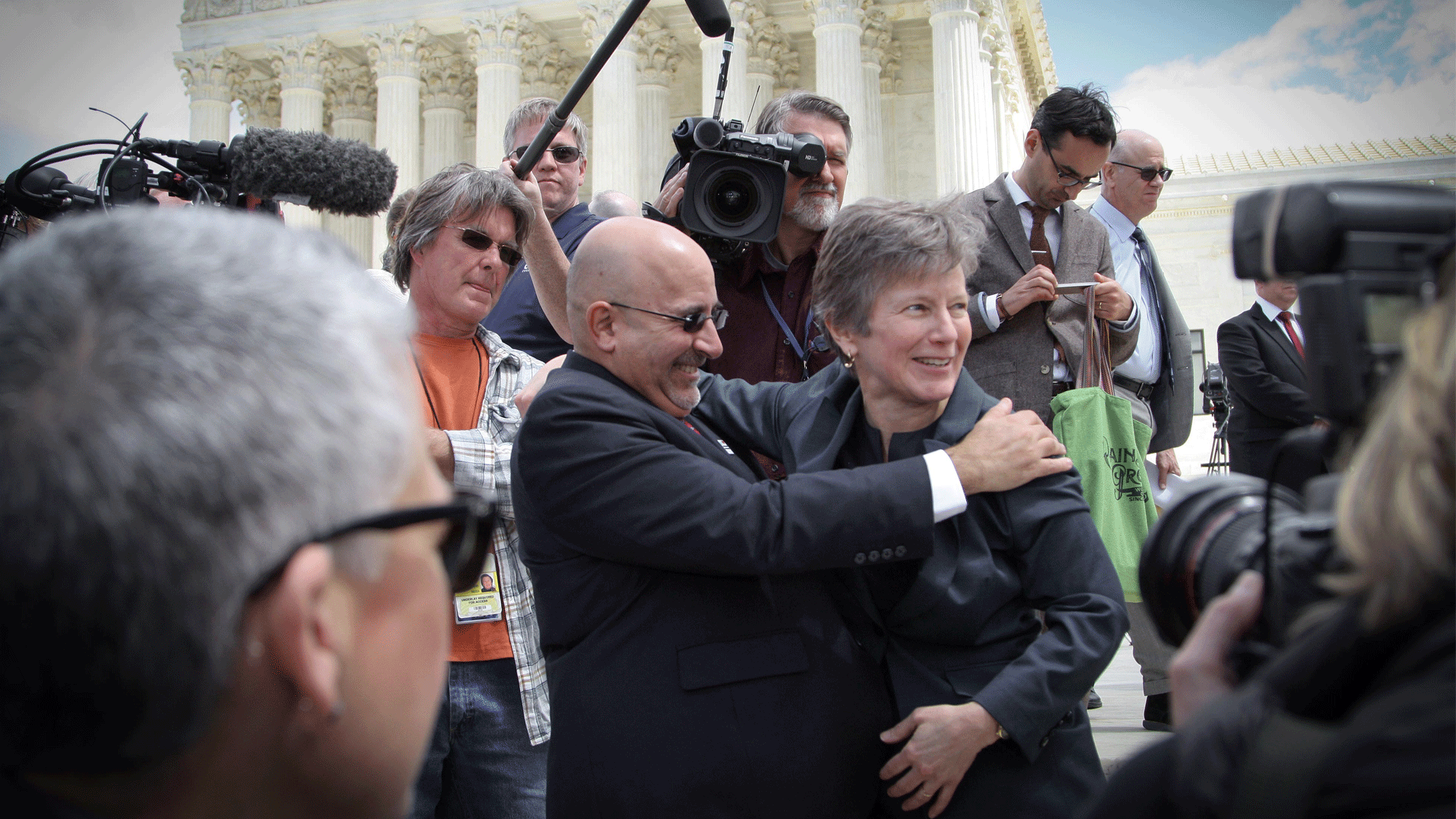 What’s the definition of a mensch? After watching this inspiring documentary, you’ll have a two-word answer: Evan Wolfson. Founder of the advocacy group Freedom to Marry and the acknowledged “godfather” of the marriage equality movement, Wolfson’s 30-year struggle to bring about justice for millions of gays and lesbians is at the heart of this fascinating history retracing the circuitous (some said impossible) path toward legalizing same-sex marriage in the United States. Friends and family say Wolfson developed his passion for social justice early during his Jewish upbringing in Pittsburgh. But even though he laid out the legal reasoning behind same-sex marriage equality as far back as his 1983 Harvard Law School thesis, the documentary rightly gives others in addition to Wolfson credit for the successes of a movement that took decades and involved many tireless champions. His co-star in the film, and the person who had to nervously argue last year’s famous Obergefell v. Hodges case before the Supreme Court, is Mary Bonauto of GLAD (GLBTQ Legal Advocates & Defenders), an equally compelling subject in a documentary which, even though we already know the outcome, manages to be gripping and suspenseful right down to the moment of the court’s decision. —Peter L. Stein

Join documentary filmmaker and moderator Susan Stern, local activists and the filmmakers from The Freedom to Marry as they discuss the current state of thee LGBT rights movement in the wake of the Supreme Court's affirmation of marriage equality.

Eddie Rosenstein is a documentary filmmaker, living in New York City. His films are about a wide range of subjects, but are mostly about regular people doing extraordinary things, often against great odds. His previous work includes: A TICKLE IN THE HEART (producer, 1996) about the world's greatest Klezmer musicians, who were 'discovered' as senior citizens;  WAGING A LIVING (co-director, 2003) for which Rosenstein followed three low-wage families for three years, capturing their attempts to extricate themselves from poverty; SCHOOL PLAY, (co-producer/director 2008) a hilarious tale of fifth graders pushed to the limit by their grade school play; SANDHOGS (producer/director, 2008) about the legendary and wild band of urban miners, without whom New York city could not possibly exist; and BOATLIFT (Producer/Director, 2011) a short film narrated by Tom Hanks which tells the epic tale of the 9/11 boatlift which evacuated half a million people from the stricken seawalls of Lower Manhattan. Eddie has also produced television programming for networks including A&E, TruTV, History, Discovery ID, HBO. PBS and AMC, and has won dozens of international film festival prizes and been nominated for an Emmy. Rosenstein teaches documentary filmmaking at the New York Film Academy, lectures frequently and lives in Brooklyn, NY, with his wife and two sons.