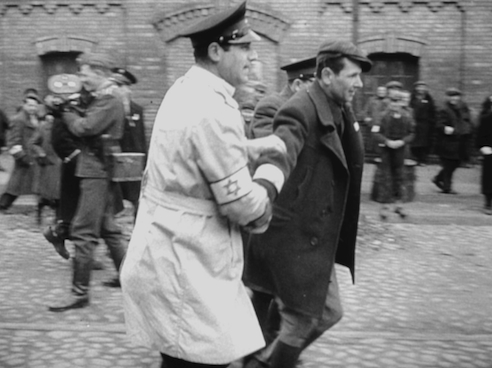 Countless Holocaust documentaries have used film clips produced by the Nazis to show what life was like in the Warsaw Ghetto. What we did not know, as we watched these harrowing scenes, was that the Nazis staged them using actual Jewish inhabitants of the Ghetto as "actors" in a never-completed propaganda film. First-time feature filmmaker Yael Hersonski presents us with all the original footage (found at an East German archive and including previously unseen outtakes), interweaving it with journal entries by the head of Warsaw's Jewish Council, diary entries of Ghetto inhabitants, testimony of a German cameraman who shot some of the footage and recollections of Ghetto survivors as they watch the material for the first time. A few minutes of newly discovered color home movie footage shot by one of the cameramen provides further evidence of both the artifice of the original production and the grim reality of the Ghetto experience. A Film Unfinished is a rigorous and profound documentary that simultaneously exposes the perversity of Nazi propaganda, honors its victims and pays tribute to the resiliency of the filmmaker's own grandmother and the other survivors of the Ghetto. Winner of the Best Editing Award, 2010 Sundance Film Festival.